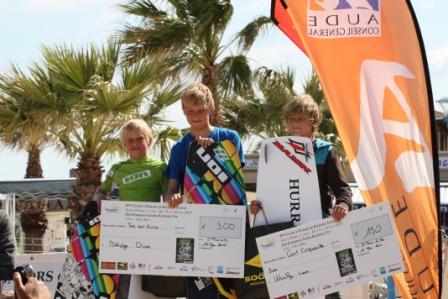 It was British Domination at the Junior European Kitesurf competition in France from 13-16th May 2010.The 4 day event involved a dingle elimination for the first couple of days followed by 2 further days of best trick, big air & board off Compettion. It was the best ever experience that team bridge could have wished for with plenty of heats & loads of wind. The standard was high in all the categories however most noticeably in the under 13’s. The first heat was with Tom against Oliver. This was a blinder of a heat for Tom, complete text book which got all the crowds going. Tom landed kite loop handle pass, slim, kgb & more. Tom went straight through to the Semi Final, even had time to change & chill on the beach while watching his elder brother do it all the hard way. With a few more years of heat expereince oliver won convincingly his next heats & earnt his place in the final.

The final for the under 13’s saw Oliver & liam Whalley, who lives in Tarifa, put in high kite loops & blind judge while Oliver had the more technical blind moves & variety that gave him the Edge. Tom got all a bit excited & went for a slim, did not land & spent the next 5 minutes body dragging to his board.The European Junior under 13’s went to Olly- age 12, Liam age 13 and Tom age 9.

The Bridge boys came home with a wedge of Euro’s, a decent trophy & a load of motivation to move forward to their next trick. Bring on the British tour which starts this weekend at Redcar.